There is no such thing as a time or place that is not suitable for the Rosary. 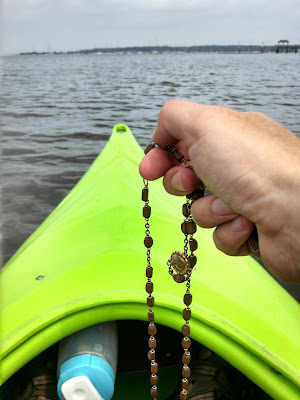 Posted by Breviarium SOP at 1:38 PM
Email ThisBlogThis!Share to TwitterShare to FacebookShare to Pinterest
Labels: The Rosary

Today, in the 1962 Dominican Rite Calendar, is the Vigil of Ss. Peter and Paul.  It is a II Class Vigil.  According the the rubrics of the 1962 Breviarium Iuxta Ritum Sacri Ordinis Praedicatorum, all is prayed as if this were a ferial day, with the following exceptions.  At Matins, the Lessons are proper and are given in the Proprium Sanctorum.  Also, since it is a II Class vigil, at Lauds the Psalms of Scheme II are prayed.  At Pretiosa, the Gospel for the Vigil is read.
Posted by Breviarium SOP at 6:34 AM
Email ThisBlogThis!Share to TwitterShare to FacebookShare to Pinterest
Labels: 1962 Dominican Rite Calendar, Dominican Breviary Rubrics, Liturgical Year

A Missa Canta, according to the Dominican Rite, will be celebrated on Sunday, August 4, 2013 at 2:00 PM at St. Patrick Catholic Church, 280 N. Grant Avenue, Columbus, OH.  The celebrant will be Fr. Austin Litke, O.P. 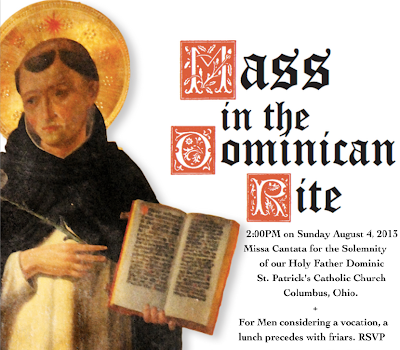 This Mass is open to the publish and is the second public celebration of the Dominican Rite in the Dominican Parish of St. Patrick's since Pope Benedict XVI's issuance of the motu proprio Summorum Pontificum.  In the 1962 Dominican Rite Calendar, August 4 is the Feast of Our Holy Father, St. Dominic, which takes liturgical precedence of the Mass of Sunday (so your Sunday obligation is fulfilled).

Today, in the 1962 Dominican Rite Calendar, we celebrate the commemoration of Blessed Innocent V, one of the four Dominican Popes.  From “Short Lives of the Dominican Saints” (London, Kegan Paul, Trench, and Trübner & Co., Ltd., 1901):

Blessed Innocent V., known before his elevation to the Papacy by the name of Peter of Tarantaise, was born of noble parents at that town, situated at the foot of the Alps, on the confines of Savoy, a territory then dependent on the Dukes of Burgundy, about A.D. 1225.  Whilst still quite a child, he was sent to study at the University of Paris, where he received the Dominican habit from the hands of Blessed Jordan, the second Master-General of the Order of Preachers, when only nine years old.  He is believed to have been one of those young postulants admitted on occasion of the General Chapter of 1234.  To the remonstrances of the capitular Fathers, who complained that these children were so ignorant of Latin as scarcely to be able to read a lesson of Matins even after much previous preparation, the holy Master-General gently replied: “Suffer these little onese to come, and forbid them not.  Know that you will see many, yea, most of them, acquit themselves gloriously of the office of preaching; and God will make use of them for the work of saving souls, in preference to many others of cultured mind.”  In none was this prophecy more brilliantly fulfilled than in little Peter of Tarantaise.  To the extraordinary beauty of person he joined the highest gifts of mind and heart; and in the shadow of the cloister, like the child Jesus in the holy house at Nazareth, he daily “grew in wisdom, and age, and grace with God and men.”  When only twenty-eight, he was judged capable of teaching theology in the University at the same time as his intimate friend, Saint Thomas Aquinas; and we are particularly told that his merit was not in the least eclipsed by that of the Angel of the Schools.   He also composed Commentaries on the Four Books of the Sentences of Peter the Lombard and on Holy Scripture, and other learned works, which in their day were scarcely less prized than those of Saint Thomas himself.  Hence, in the year 1259, he was chosen with [Saint] Albert the Breat, Saint Thomas, and two other distinguished religious, to draw up a general plan of studies to be followed in all Dominican schools.

At the age of forty, his rare prudence, his knowledge of men, his admirable meekness, and his invincible firmness, caused him to be elected Provincial of his Order in the Province of France, which then numbered dome fifty Convents.  His journeys in the visitation of his Province were always made on foot, with the simplicity of a poor Friar; he everywhere diffused the good odor of his virtues and kept alive primitive fervor and zeal for souls in the hearts of his Brethren.  Meanwhile, the masters and students at the University of Paris, who deeply regretted his absence, earnestly begged to have him back among them.  The General Chapter of the Order granted their petition, and Father Peter returned to Paris where he took his doctor’s degree and succeeded Saint Thomas at the head of the School.  In the year 1269, however, he was re-elected Provincial.  Three years later, Blessed Gregory X., who then filled the Chair of Saint Peter and who had formerly been one of his pupils at Paris, appointed him Archbishop of Lyons and Primate of France.  A few months later, he raised him to the dignity of Cardinal at the same time as the great Franciscan, St. Bonaventure, and made him Bishop of Ostia and Velletri and Dean of the sacred College, commanding him to continue the administration of the Archdiocese of Lyons until the nomination of his successor in that see.

The saintly Pontiff employed the new Cardinal to assist him in making preparations for the General Council which he had convoked at Lyons, for the purpose of effecting a re-union between the Greek and Latin Churches, and organizing a fresh Crusade for the recovery of the Holy Land.  The Council opened on May 7, 1274.  Cardinal Peter of Tarantaise took a distinguished part in its proceedings and displayed an extraordinary talent for business.  He was especially charged with all that concerned the re-union of the Greeks with the Latins, and succeeded in inducing the ambassadors of the Greek Emperor to submit to the faith and authority of the Roman Church.  It fell to his lot to preach the funeral sermon of his friend and colleague, Saint Bonaventure, who died at Lyons during the Council;  and he did so with a touching eloquence which caused the whole of his audience to mingle their tears with his own.

In January, A.D. 1276, Blessed Gregory X died, and Cardinal Peter of Tarantaise was unanimously elected as his successor, assuming the name of Innocent V.  The holy man immediately set himself to labour zealously for the peace of Christendom, the repression of the Moors, who were threatening a fresh invasion of Spain, the acceptance by the Greeks of the adhesion of their ambassadors to reunion with the Roman Church, and the undertaking of a fresh Crusade against the infidels.  Such splendid beginnings excited the greatest hopes for the new Pontificate, but it was doomed to be of brief duration.  On June 22nd, and attack of malignant fever closed the holy Pontiff’s career; he had sat in the Chair of Peter only five months and two days.  He was laid to rest in the Lateran Basilica, and rendered himself illustrious by a host of miracles.  Pope Leo XIII, raised him to the Altars of the Church, A.D. 1898.

From the "The Martyrology of the Sacred Order of Friars Preachers" (Tr. by Rev. W. R. Bonniwell, O. P., The Newman Press - Westminster, Maryland, 1955):

At Rome, Blessed Innocent V, pope. Previously he had been known as Friar Peter of Tarantaise, of the Order of Preachers. He excelled in both learning and sanctity. He was made Archbishop of Lyons and later Cardinal Bishop of Ostia; finally, he was elected pope. He labored with suave prudence to protect the liberty of the Church and to promote concord among Christians. His fame was spread by many miracles both in life and after death.


God, you enriched your bishop and confessor, the blessed Innocent, with the gifts of knowledge and prudence, and made him a promotor of peace and unity; grant, through his prayers, that we may relish what is heavenly, and in perfect concord follow what is right.  Through Our Lord…
Posted by Breviarium SOP at 6:43 AM
Email ThisBlogThis!Share to TwitterShare to FacebookShare to Pinterest
Labels: 1962 Dominican Rite Calendar, Dominican Feast Days, Dominican Saints & Blesseds
Newer Posts Older Posts Home
Subscribe to: Posts (Atom)