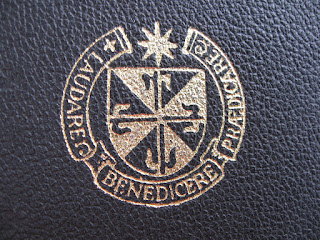 In response to all the questions that I get regarding advice on how to obtain an old edition of the Breviarium SOP, I have created a link on my blog which provides the simple instructions that I usually give to people when they contact me via email.  The link is on the upper right hand side of the blog page.
Not that I don't enjoy hearing from people interested in the venerable Office of the Dominican Order, but I think this link may be more useful that simple emails.
As always, feel free to reach out to me via email if you have any questions.  Veritas!
Posted by Breviarium SOP at 12:12 PM
Email ThisBlogThis!Share to TwitterShare to FacebookShare to Pinterest
Labels: General Announcements 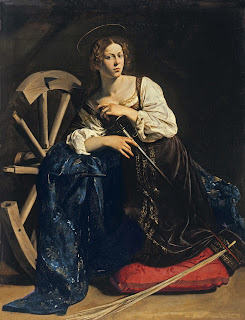 Today, in the 1962 Dominican Rite Calendar, we celebrate the feast of St. Catherine of Alexandria, Virgin and Martyr.  The feast is III Class, so the ordinary office is prayed according to the rubrics.

Prior to the mid-20th Century revisions of the calendar, her feast was celebrated as a Totum Duplex with an octave (December 2), and her office contained a partial set of propers (the office did not include proper antiphons for the psalms of Matins, and only included three of the original nine responsories).  The antiphon at 1st Vespers for her feast in the 1909 Breviarium S.O.P. was "Hail! O Catherine, thou gem of virgins.  Hail!  O glorious spouse of the King of kings."
Due to the circumstances of her martyrdom, as one defending the Faith against pagans, and the fact that she is reputed to have been a philosopher, she has traditionally been referred to as one of the two "protectresses" of the Order, the other being St. Mary Magdalene.  In a future post, I will give the account of their intervention in the miracle of St. Dominic at Soriano.

November 12: Feast of All Saints of the Dominican Order, II Class

Today, in the 1962 Dominican Rite Calendar, we celebrate the feast of All Saints of the Dominican Order.  The feast is II Class and so the semi-festive office is prayed according to the rubrics.

How truly humbling it is to be part of a religious Order which includes over 30 saints, 3 Doctor's of the Church, innumerable martyrs and 4 Popes.  Not only are these holy men and women, drawn from every station in life, models of sanctity for us, they are powerful intercessors for us before the heavenly throne of our loving God and Father.  The litany of the Dominican Saints can be downloaded here.
Read more »
Posted by Breviarium SOP at 12:00 AM
Email ThisBlogThis!Share to TwitterShare to FacebookShare to Pinterest
Labels: 1962 Dominican Rite Calendar, Dominican Feast Days, Dominican Liturgical Year, Dominican Saints & Blesseds, Liturgical Year
Newer Posts Older Posts Home
Subscribe to: Posts (Atom)