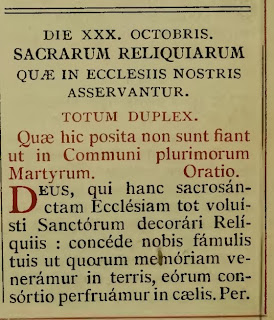 One of the great tragedies of the 20th century liturgical changes was the "Romanization" of the Dominican calendar that occurred in the revision of 1960, and which is codified in the calendar of the 1962 Breviarium iuxta ritum sacri ordinis praedicatorum.  Many wonderful Dominican feasts were removed from the liturgical calendar of the Order, including those of many Dominican blessed's and many other feasts that were particular to the Dominican Order.  One such feast was the Feast of the Holy Relics.

As noted in the Martyrology of the Sacred Order of Friars Preachers (Bonniwell, 1955), this feast was a commemoration of "holy martyrs and of the other saints, whose bodies or relics are preserved in our churches."  In the 1909 Breviarium iuxta ritum sacri ordinis praedicatorum  the feast is celebrated on October 30, however in the 1924 Breviarium S.O.P. it appears on  October 31, the Vigil of All Saints Day, and remained there until it was removed in 1960.  The feast  had the rank of a totum duplex feast, which in 1962 would have been considered a 1st Class Feast.   For the Office, everything was taken from the Common of Many Martyrs, except the Collect (see below), and lessons 4, 5, and 6 at Matins, which were taken from a tract by St. John Damascene's "De Fide Orthodoxa" .  A commemoration of St. Quintinus was also made.  Interestingly, this feast superseded the Vigil of All Saints at Matins, as noted in the 1924 Breviarium S.O.P., which states "De Vigilia Sanctorum in Officio nihil fit" at the end of the Office.

Today, in the 1962 Dominican Rite Calendar, we celebrate the feast of Saint Louis Bertrand, confessor of the Order of Preachers.  His feast is III Class, so the ordinary office is prayed according to the rubrics.  A commemoration of Ss. Denis, Bishop, and companions is made at Lauds only. 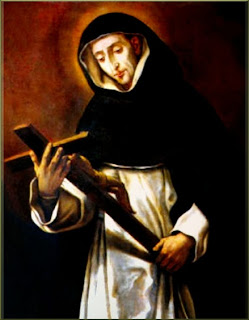 LOST TRADITIONS: October 7-14 Octave Of B.V.M. Of The Rosary 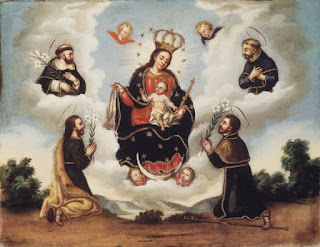 If the Order had maintained its system of keeping the octaves of its major feasts, the Octave of the B.V.M. of the Rosary would be celebrated from October 8 till October 14. This is one of the many octaves that the Dominicans included in their calendar, as a means of prolonging the celebration of saints (or in this case, their Patroness), that were casualties of the revisions of Dominican calendar that took place in the middle of the 20th Century. Not all of the Dominican saints had "solemn" octaves after their feast day, but the major ones like St. Dominic, St. Catherine of Sienna, St. Thomas Aquinas, and St. Peter Martyr did.

Actually, this feast was originally celebrated on the 1st Sunday of October. That is where it appears in the 1909 calendar. This means that the octave was celebrated on the 2nd Sunday of October. You can see the problem that was caused, by assigning feasts of the sanctorale to the Sundays of the year. This, along with the numerous totum duplex feasts of the saints of th eOrder and others led to the situation where the Sundays were hardly ever celebrated as such. Moving the date of the feast to October 7 (the actual day of the Battle of Lepanto) was a nice solution that preserved the solemn celebration of the feast, and avoided the interruption of the temporale.

Every day during the octave, a commemoration was made at Lauds and Vespers using the proper versicle/responsory, Benedictus/Magnificat antiphons provided in the sanctorale.  The versicles and responses come from the feast, as does the antiphon at Lauds (which comes from 1st Vespers of the feast), but I have not been able to tell where the antiphon for Vespers comes from.  In fact, I could not find a translation of the antiphon for Vespers.  So if anyone out there can either translate it, or can point me toward a good English translation of it, i would be immensely appreciative.

Posted by Breviarium SOP at 12:00 AM
Email ThisBlogThis!Share to TwitterShare to FacebookShare to Pinterest
Labels: Lost Feasts, Lost Traditions

October 7: The Blessed Virgin Mary of the Rosary, I Class

Today, in the 1962 Dominican Rite Calendar, we celebrate the feast of the Blessed Virgin Mary of the Rosary.  The feast is I Class in the calendar of the Dominican Order, so the festive office is prayed according to the rubrics.  Traditionally, Dominican Tertiaries would fast on the vigil of this great feast.  The hymns at 1st Vespers, Matins, and Lauds celebrate the three traditional groupings of mysteries...the Joyful, Sorrowful, and Glorious.  You can download the entire English translation of the office here.


The great feast was announced at Pretiosa yesterday:

The Commemoration of Our Lady of Victory, which Pope Plus V instituted to be made annually, on account of the famous victory gained on this very day by the Christians in a naval battle against the Turks, by the assistance of the same Mother of God. However, Gregory XIII decreed that for the same victory there should be celebrated on the first Sunday of this month the annual solemnity of the Rosary of the Most Blessed Virgin. 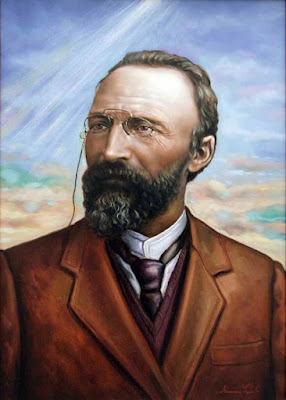 Today is the feast day of Blessed Bargolo Longo, confessor of the Order of Preachers and a Dominican tertiary.  I will be making a commemoration of his office at Lauds this morning using the antiphon, versicle/responsory and collect pray from the Common of a Confessor.  He is one of the many Dominicans to be beatified after the last revision to the Breviary in 1962. (He was beatified in 1980 by Pope St. John Paul II).

There is a beautiful post on Bl. Bartolo over at the Vultus Christi blog, by Benedictine Prior Fr. Mark Kirby, which includes the text of the prayer that he composed to Our Lady.  The prayer is called the Supplica, and it is a true gem, inspired by much prayer and penance.

When my "ex"-wife began practicing Eastern style "meditation", I turned to Bl. Bartolo Longo, the "Apostle of the Rosary" for help.  Of all the saints and blesseds in Heaven, he certainly knows the power of false religions, having been converted by a Dominican Friar away from satanism and back into the safety of Holy Mother Church.

Blessed Bartolo Longo...Apostle of the Rosary...please pray for my "ex"-wife, and all those who have fallen into the darkness of false spirituality. "O Blessed Rosary of Mary..." be our "Tower of salvation in the assaults of Hell..."
Posted by Breviarium SOP at 12:00 AM
Email ThisBlogThis!Share to TwitterShare to FacebookShare to Pinterest
Labels: Votive of Dominican Blesseds

Today, in the 1962 Dominican Rite Calendar, we celebrate the feast of Blessed Raymond of Capua, confessor of the Order of Preachers.  The feast is III Class, so the ordinary office is prayed according to the rubrics. 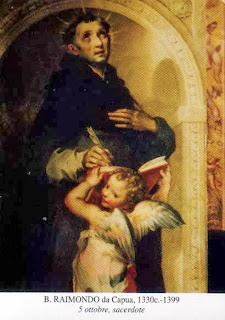