One of the casualties of the revision of the Breviary ordered by Pope St. Pius X, was the feast of the Translation of the Relics of St. Thomas Aquinas.  To commemorate the transferal of the Angelic Doctor's relics to Toulouse on January 28, 1369, the general chapter of that year, with the permission of Pope Urban V, instituted a liturgical feast on January 28.  The feast was given the rank of totum duplex.  A commemoration was also made of the "second feast" of St. Agnes on this day. 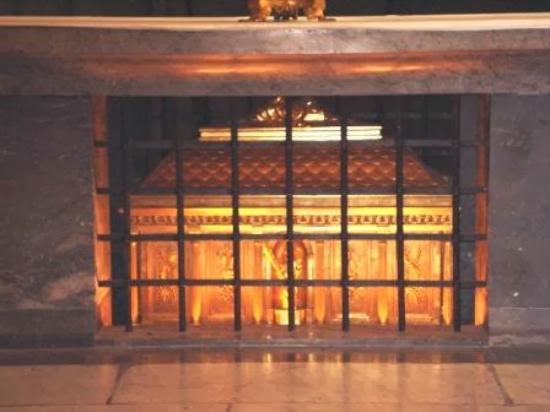 The Office contains a complete set of propers for the feast, and the "laudate" Psalms were prayed at 1st Vespers under the single super Psalmos antiphon.  Most of the propers for the feast in the Office were the same as on the saint's feast day (March 7), including the Collect prayer, with the following exceptions:

1st Vespers:  The Magnificat antiphon is "O Thomas, praise and glory of the Order of Preachers, take us to heaven thou doctor of Divinity."

Matins:  Lessons iv, v, and vi are "from St. Antonius, and from other approve authors", as opposed to the biographical narrative that is provided on March 7.  All of the antiphons and versicles are the same as on March 7.

Lauds:  On March 7, the first antiphon at Lauds commemorates "the joyful day on which Thomas...becomes a member of the court of heaven".  For the feast of the Translation, this first antiphon is changed to "Let us praise Christ the King of glory, who through Thomas fills the world with the light of the Church's doctrine of grace."

The great luminary of the Church, Saint Thomas Aquinas, departed this life at the Benedictine Abbey of Fossa Nova, when on his way to the General Council of Lyons, and his sacred remains were interred there until such time as the Master-General of the Dominicans should determine to what Convent they were to be removed. The Benedictines were resolved not to part with the treasure; hence they secretly removed the body by night from the cloister where it had been buried and laid it in the Chapel of Saint Stephen. But the Holy Doctor would not suffer that those who came from all parts to implore his intercession should offer their supplications at an empty tomb. He therefore appeared to the Abbot, reproved him severely for what he had done, and threatened him with chastisement if his remains were not restored to their first resting-place. The Abbot obeyed, and, taking a few of the monks into his confidence, proceeded with the utmost secrecy to a fresh translation of the body. But the moment the tomb was opened there issued forth a most sweet odor, which spread itself throughout the Convent and brought the entire community to the church to ascertain whence it came. The body was found to be in a state of perfect preservation, both on this occasion and at another translation seven years later, when it was laid in a marble tomb by the side of the high altar. 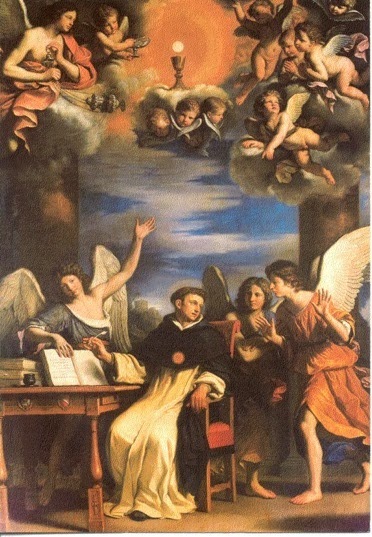 Fourteen years after the death of the Saint the monks gave his right hand to his sister, the Countess of San Severino, and this precious relic became, later on, the property of the Dominican Convent at Salerno, where it is still preserved incorrupt. The monks then presented the head of Saint Thomas to the Count of Piperao, and in the year 1349, hearing that a celebrated bandit had formed the sacrilegious project of stealing and selling the body of the Saint, they entrusted the remainder of the sacred relics to the keeping of the Count of Fondi. After some time Saint Thomas appeared to this nobleman and threatened him with the vengeance of God if he did not give up his body to the Brethren of his own Order. This was accordingly done; but the monks of Fossa Nova were by no means prepared to relinquish their claim to the possession of the sacred relics. They carried their complaints before Pope Urban V., himself a member of the Benedictine Order. His Holiness testified extreme displeasure at what had been done, and commanded the Master-General of the Dominican Order to restore the body of Saint Thomas to the monks of Fossa Nova. In vain did the Master-General represent the earnest desire of the Dominican Order to possess the relics of the greatest of its sons: Urban was inexorable. A few days later, on the Festival of Corpus Christi, the General ventured to renew his entreaties. Reminding his Holiness that the Church was indebted to Saint Thomas for the beautiful Office recited on that feast, he begged that his relics might rest amongst his own Brethren, who would show them more honor than anyone else.

The Pope hesitated for a few moments; then in the most solemn manner he gave judgment in the following terms: "By the authority of our Lord Jesus Christ, of the Holy Apostles Peter and Paul, and ours, we give and grant the body of the Blessed  Thomas of Aquin, professed religious of the Order of Preachers, to you, the Master-General, and to the said Order, to be kept either at Toulouse or at Paris, as shall seem good to the next General Chapter and to the Master-General of the Order; in the name of the Father, and of the Son, and of the Holy Ghost." And all the bystanders answered, "Amen." On the following day, however, the Pope decided the question in favor of Toulouse, where he had himself founded a university.

In virtue of this permission, the holy body was brought from Fondi and the head from Piperno, and thence both were conveyed with the utmost caution to France. The journey from Gaeta to Prouille, where the holy body was first deposited, occupied two months, and many miracles took place on the way. "It was evident," says an old chronicler, “that Saint Thomas went where it pleased him." After remaining for a month at Prouille the precious remains were brought to the Convent of the Order of Saint Dominic at Toulouse on January 28, A.D. 1369, more than 50,000 persons coming out to meet them, bearing lighted tapers, whilst 10,000 carried large torches round the bier. The canopy over the relics was borne by the Duke of Anjou, brother to the King of France, and by other persons of the highest rank. In that same year an arm of the Holy Doctor was detached from the body, and deposited with great solemnity in the Dominican Church of Saint James in Paris, where the Saint had taught with so much applause; and, a few years later, another considerable relic was given to his beloved Convent of Saint Dominic at Naples.

Thus the remains of the Angelic Doctor at length reposed in peace, according to his desire, in the midst of his Brethren, until the evil days of the French Revolution, when the Dominicans were driven from their Convent of Toulouse. The sacred remains were then Jan. transferred for greater safety to the crypt of the Church of Saint Sernin, where sacrilegious hands were soon laid on the costly reliquaries wherein they were contained. During the present century the relics of the Holy Doctor have undergone several translations into more suitable reliquaries and to more honorable places in the same Church. At the translation in the year 1852, the sermon was preached by Pere Henri-Dominique Lacordaire, the restorer of the Dominican Order in France; and in the last, which took place in the year 1878, the Archbishop of Toulouse was assisted by the Vicar-General of the Order, the Most Rev. Father Sanvito.

This day is regarded as the special festival of the Confraternity of the Angelic Warfare or Girdle of Saint Thomas Aquinas.


O God, you make your Church glorious through the wonderful teaching of the blessed Thomas, your confessor and doctor, and render it fruitful by his holy deeds; grant to us, we beseech you, both to understand what he taught and to imitate what he did.  Through our Lord...
Posted by Breviarium SOP at 12:00 AM
Email ThisBlogThis!Share to TwitterShare to FacebookShare to Pinterest
Labels: Dominican Liturgical Year, Lost Feasts
Newer Post Older Post Home