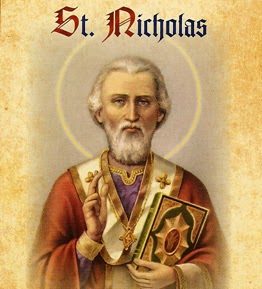 The feast of St. Nicholas, Bishop of Myra, is one of those feasts in the Dominican Calendar which is III Class, as in the Roman Rite, but unlike the latter rite the Dominican Breviary contains a complete set of propers, as if the feast were II Class.  I was curious about the reason for this, so I did a little research in Fr. Bonniwell's "A History of the Dominican Liturgy", and this is what I found.

As the 13th century was drawing to a close, the Order elevated three (3) feasts on the calendar.  They were The Nativity of St. John the Baptist, the Feast of Ss. Peter and Paul, and St. Nicholas.  The two former feasts were elevated to totum duplex (the equivalent to a 1st Class Feast).  The feast of St. Nicholas was elevated to duplex (roughly equivalent to a II Class Feast).The reason for this is quite interesting.
As Fr. Bonniwell explains it (p. 203):


The last feast to be elevated in the thirteenth century was that of St. Nicholas, which was made a duplex.  The reason is interesting:  this Saint was the Patron of an extremely popular master-general, Nicholas Boccasino.  It was a compliment on the part of the capitulars to their leader, who was destined shortly to become Pope Benedict XI.

So it was as a favor to the saintly Master General of the Order, the future Benedict XI, that successive Chapters voted to elevate the feast of St. Nicholas to that of a duplex.  The office contains many beautiful antiphons, in particular the Benedictus antiphon at Lauds is quite inspiring.  A sampling of the propers of his Office are given below:

O God, you adorned the blessed bishop Nicholas with countless miracles; grant, we beseech you, that through his merits and prayers, we may be delivered from the flames of hell.  Through our Lord...
Posted by Breviarium SOP at 11:05 AM
Email ThisBlogThis!Share to TwitterShare to FacebookShare to Pinterest
Labels: 1962 Dominican Rite Calendar, Dominican Liturgical Year, Dominican Saints & Blesseds, Liturgical Year
Newer Post Older Post Home