Today, in the 1962 Dominican Rite Calendar, we celebrate the feast of St. Agnes of Montepulciano, virgin of the Order of Preachers.  The feast is III Class, so the Ordinary Office is prayed.  Like many III Class feasts of the Dominican saints in the Breviary, her office contains the full propers as if the feast were II Class.  At Lauds, the Psalms of Sunday are prayed.


At Montepulciano, St. Agnes, virgin, of the Order of our holy Father Dominic. She was illustrious for her great virtues and her miracles. She merited to be adorned with divine gifts by Christ her Spouse. St. Catherine of Siena learned in a vision that she and Agnes would share equal glory in Heaven.


Saint Agnes was born of virtuous parents in the neighborhood of Monte Pulciano, in Tuscany, about the year 1268. Extraordinary signs and a piety far beyond her years presaged what this child was one day to become. Whilst still very young, she succeeded in extorting from her parents’ permission to enter an exceedingly austere Monastery. After a few years she was sent to assist in the foundation of another Monastery for the education of young girls at Procena, of which she became Abbess, in virtue of a special dispensation from the Holy See, when only fifteen.

She led a life of continual prayer and rigid penance; and God vouchsafed to show how pleasing she was in His sight by many signs and wonders. Flowers of exquisite fragrance and beauty would spring up on the spot where she had prayed; showers of manna, in the shape of little white crosses, would fall upon her in the presence of a crowd of witnesses; she was favored by frequent visions, and ten times received Holy Communion from an angel's hand. So great was the poverty of her Monastery that money and provisions often failed; in these circumstances the wants of the Community were sometimes supplied by miracle. 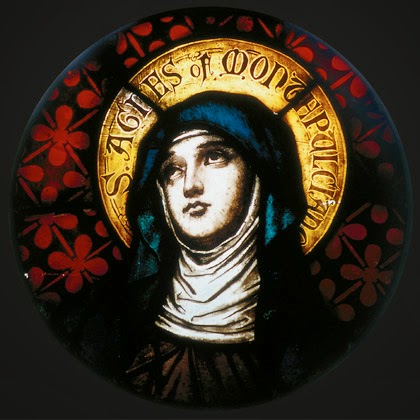 After seventeen years spent at Procena, the inhabitants of Monte Pulciano entreated Saint Agnes to come and found a Convent within their walls. She had recourse to prayer in order to ascertain the will of God, and, as she prayed, a wonderful vision was granted her. She seemed to herself to be standing on the sea-shore, and three large and splendidly equipped boats floated on the waters before her. In one of these stood Saint Augustine, Saint Francis was in another, whilst on the prow of the third she beheld Saint Dominic. Each of the three Saints pressingly invited her to his boat, especially Saint Francis, who alleged the resemblance of the habit she then wore with that of his daughters, the Poor Clares. After a long dispute, Saint Dominic said to his two companions, " It will not be as you desire; the Lord has disposed that Agnes should embark on my boat." So saying, he drew her on board, and immediately a heavenly messenger stood beside the Saint and made known to her that she was to establish a Community of virgins, as desired, at Monte Pulciano, on a hill which had hitherto been the resort of women of evil life, and that her daughters were to take the habit and follow the rule of Saint Dominic.

This was accordingly done, and the Saint governed the new Community with the same wisdom and sweetness with which she had formerly ruled at Procena, and was favored with the like demonstrations of God's watchful providence. Whilst still at Procena, Our Lady one day appeared to her and placed the Divine Infant in her arms. Before restoring Him to His Mother, the Saint had possessed herself of a little cross which was suspended from His neck by a slender thread. This treasure she had left behind her on coming to Monte Pulciano, and she now wrote to claim it. The Community at Procena, who were in great grief at losing their holy Abbess, absolutely refused to give up the cross; whereupon the Saint betook herself to prayer, and it was immediately brought to her by an angel. 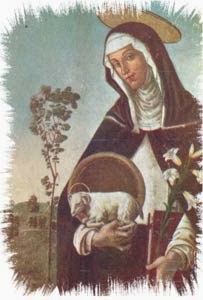 When the end of her earthly pilgrimage drew near, Saint Agnes was granted a Divine warning of the sufferings which awaited her as a final purification before receiving her crown. One Sunday at break of day, as she was allowing herself a little rest after prayer, it seemed to her that an angel took her by the hand, and leading her under an olive-tree, as though to remind her of our Lord's agony in Gethsemane, presented her with a chalice containing an exceedingly bitter draft. "Drink this chalice, Spouse of Christ," said the angelic visitant; "the Lord Jesus drank it for thee." The servant of God eagerly obeyed for the love of her Divine Bridegroom; but, before she had drained the cup, the vision disappeared and she found herself once more in her cell. This vision was repeated on nine consecutive Sundays and shortly afterwards the Saint was attacked by the long and painful illness which brought her to the grave.

In compliance with the wishes of her Sisters, she sought relief by paying a long visit to some medicinal springs at a short distance from the Convent. Here our Lord was pleased to honor His faithful Spouse by many prodigies. A miraculous hot water spring gushed forth which afterwards bore her name and was found far more health-giving than any of the former springs. Finding she derived no benefit from the baths, the Saint returned to her Convent, which she had been very unwilling to quit. As she lay stretched on her bed of suffering, her spiritual children knelt around her, weeping over their approaching loss. "If you loved me," she said to them with a sweet smile,” you would rejoice, because I am about to enter into the joy of my Spouse. Be not afflicted beyond measure at my departure hence; from heaven I shall not lose sight of you; I shall be your mother, your companion, and your sister whenever you call upon me in your wants." Her last words were, "I go to Him who is my only hope." Her holy and happy death, which was followed by many wonders, took place on the 2Oth of April, A.D. 1317. Her Life was written by Blessed Raymond of Capua, who became Confessor to the Community some fifty years after her death. Readers of the Life of Saint Catharine of Siena will be familiar with the wonders which accompanied the visit of that Saint to the tomb of Saint Agnes, and with the revelation made to her that they two were to enjoy a like glory in heaven. Saint Agnes was canonized by Benedict XIII., A.D. 1726.

O God, you were pleased often to shed a heavenly dew over the blessed Agnes, your virgin, and to adorn with various fresh-blown flowers the places where she prayed; mercifully grant, through her intercession, that we be sprinkled with the unfailing w of your blessing and be made fit to receive the fruits of immortality. Through our Lord...
Posted by Breviarium SOP at 12:00 AM
Email ThisBlogThis!Share to TwitterShare to FacebookShare to Pinterest
Labels: 1962 Dominican Rite Calendar, Dominican Feast Days, Dominican Liturgical Year, Dominican Saints & Blesseds, Liturgical Year
Newer Post Older Post Home