Today, in the 1962 Dominican Rite Calendar, we celebrate the feast of St. Vincent Ferrer, Confessor, of the Order of Preachers.  It is the 600th anniversary of his death.  The feast is II Class and therefore the semi-festive office is prayed, and at Lauds and Vespers a commemoration is made of the ferial office of Lent.  At Lauds, the Psalms of Sunday are prayed.

I have a particular devotion to this remarkable saint, for numerous reasons, but he seems to me to be the one Dominican saint who so perfectly exhibited in his life the true spirit of the Order of Preachers, as envisaged by Our Holy Father St. Dominic.  We could surely use the "Angel of the Apocalypse" today, with so many people having fallen away, not just from the Faith, but from belief in God in general.  Interestingly, the Dominican Breviary contains rubrics for the blessing of water for the sick in honor of St. Vincent Ferrer.  You can find a very interesting article about the history of this reserved blessing here, at the website for the Dominican Province of St. Joseph.  St. Vincent Ferrer, pray for us.

THIS great ornament of the Dominican Order was born about the year 1346 at Valentia in Spain, of pious and well-to-do parents. Even before his birth wonderful signs presaged his future sanctity; and, after a childhood of singular holiness, he took the habit of a Friar Preacher when entering on his eighteenth year. During the years of study and teaching which followed his profession, he doubtless practiced the lesson he so beautifully gives to others in his "Treatise on the Spiritual Life," a book which in its day enjoyed as great a popularity as the "Imitation of Christ" and the "Spiritual Combat" in our own times. "When you are reading or studying, you should often turn to our Lord to converse with Him, and to ask Him to give you understanding. . . . Hide yourself in the Wounds of Jesus and then resume your reading." 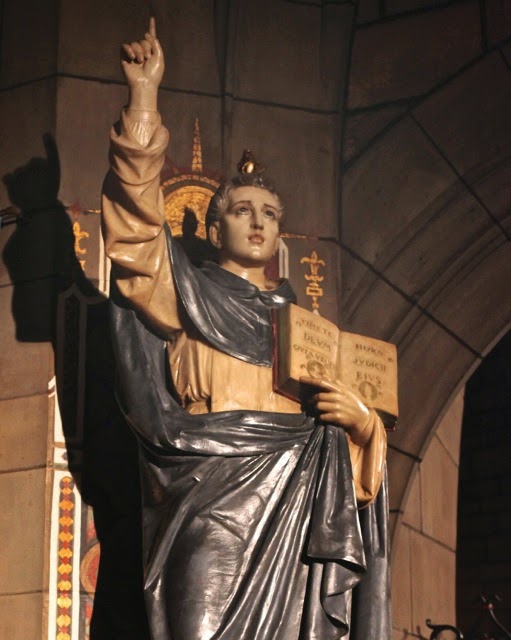 Never, perhaps, had Europe stood in such need of being evangelized by a Saint as during the latter half of the fourteenth and the beginning of the fifteenth century. Two terrible scourges, each bringing countless evils in its train, were desolating the Church and the world. One was the awful pestilence known as the Black Death, which is said to have carried off one third of the human race; the other was the Great Schism, during which sometimes as many as three rival Popes divided the allegiance of Christendom. It was by no means easy at the time to know which election had been valid; and, whilst England remained faithful to the true Pope, France and Spain, probably in perfect good faith, supported the Anti-Pope, who had established himself at Avignon. Saint Vincent Ferrer was for some time Confessor to the Anti-Pope, Peter de Luna (Benedict XIII.). The anxieties of this office caused the Saint a severe illness, but our Lord appeared to him and cured him, at the same time bidding him quit the Pontifical Court and go forth to preach throughout the length and breadth of France and Spain the approach of the Last Judgment. With extreme difficulty the Saint at length obtained from Benedict permission to obey the command, and entered upon his commission with ample powers as Legate of the Apostolic See. The Divine Head of the Church, who was thus providing for her needs in her hour of trial, endowed this messenger with miraculous gifts almost unparalleled in history.

The remaining twenty years of Saint Vincent's life were spent in evangelizing the countries which our Lord had assigned to him as his field of labor. He also preached in Savoy and Italy. In Christian art he is depicted with wings, in allusion to the passage in the Apocalypse relating to the "angel flying through the midst of heaven, having the eternal gospel, to preach unto them that sit upon the earth, and over every nation, and tribe, and tongue and people," bidding them "fear the Lord, and give Him honor, because the hour of His judgment is come." For the common theme of Saint Vincent's preaching was to exhort men to prepare for the coming of the Judge. A large multitude of people was accustomed to accompany the Saint from place to place, the number amounting to many thousands. These often followed him either simply from devotion and to have the advantage of his daily sermon, or they were penitents, great sinners converted by him and anxious to atone for their past life. It was calculated that more than 100,000 persons, who were considered hopelessly obstinate in an openly wicked life, were brought to sincere and lasting repentance by the preaching of Saint Vincent. Wherever he appeared, heresy was put to flight, enemies were reconciled, and deadly feuds extinguished. God was pleased by his means to convert 25,000 Jews and 8000 Moors in various parts of Spain. By his persuasion a large number of churches, monasteries, and hospitals were erected in various places and he also caused many bridges to be built over rivers for the benefit of the people. He loved to collect children around him and would teach them how to make the sign of the cross and to say the Our Father, Hail Mary, and Creed, instructing them in the simplest words how to show their love for God, to obey their parents, and to do good to others. He is regarded in Spain as the special patron of orphans and was the founder of some celebrated orphanages, which were placed under the care of Dominican Tertiaries. 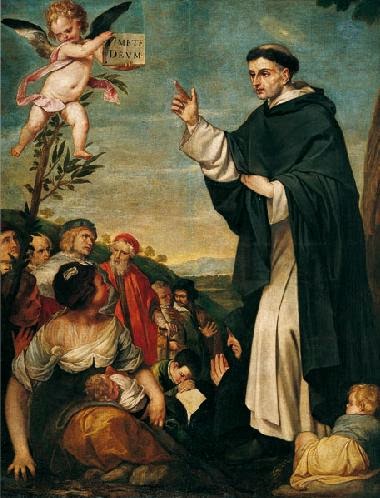 After his daily sermon, Saint Vincent, to satisfy the devotion of the people, was obliged to allow them to kiss his hand in token of reverence and to bring the sick that he might lay his hand upon them with prayer. An immense multitude, whose number is known only to God, were thus perfectly cured of every kind of disease. On more than one occasion he raised the dead to life and he may be considered the great Thaumaturgus of the Dominican Order. In the midst of these astonishing signs of the Divine power working through him, Saint Vincent's humility remained ever his most distinguishing virtue. To a Franciscan friend, who, in the midst of a public ovation, said to him, "Brother Vincent, how is pride now?" the Saint replied with a smile, "It comes and it goes, Brother, but it never stays;" and no one was ever more sincere in acknowledging himself an unprofitable servant.

Worn out with age and labor, Saint Vincent was attacked by his last illness at Vannes, in Brittany, and happily departed to our Lord on Wednesday, April 5, A.D. 1419, at the age of seventy-three. He was canonized by Pope Callixtus III in the year 1455.

O God through the wondrous preaching of your confessor, the blessed Vincent, you granted that a multitude of peoples should come to acknowledge your name; grant, we beseech you, that we may be worthy to be rewarded in heaven by him whom he announced on earth as the Judge who is to come, our Lord Jesus Christ, your Son, who with you lives...