Today, in the 1962 Dominican Rite Calendar, we celebrate the feast of St. Martin de Pores.  The feast is III Class so the Ordinary Office is prayed according to the rubrics.  Like many III Class feasts, the Office contains a full set of propers as if it was a II Class feast.  At Lauds, the Psalms of Sunday are prayed.

At Lima in South America, [Saint] Martin de Porres, a tertiary of the Order of Preachers. Having pronounced his solemn vows to God, he united integrity of life so perfectly with the most severe penances, that both before and after death he merited to become famous for his miracles. 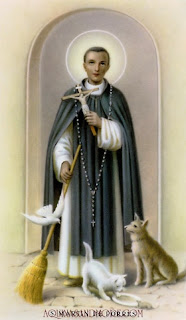 Blessed Martin was a native of South America, and was born at Lima, the capital of Peru, A.D. 1569.  His father was a Spanish knight of noble birth, but his mother, though she belonged to one of the richest families of Panama, was of the despised colored race. The child inherited her features and complexion, on which account his father conceived a dislike for him and turned him out of his house. From his tenderest years little Martin was distinguished for his spirit of piety and mortification. At the age of thirteen he already devoted part of the night to prayer and contemplation, gave away to the poor all the money that was bestowed upon him, and even deprived himself of his own food and clothing on their behalf. In order to be able to assist them more efficaciously, he studied medicine and surgery. He always exercised his art gratis, and God often rewarded his charity by marvelous and even miraculous cures.

When he was still young, Our Lady herself commanded him to enter the Dominican Order. In obedience to her will, he accordingly begged to be admitted into the Convent of the Holy Rosary in his native city. His birth, his talents, and above all, his reputation for sanctity, made the Fathers anxious to give him the habit of a choir religious, but he steadfastly refused even the lowly position of a lay brother, preferring to serve the Community in the yet humbler capacity of a Tertiary. Indeed, humility was ever his most distinguishing virtue, and he sincerely rejoiced when treated with scorn and contempt. He became the Infirmarian of the Convent, and, in fact, of all the poor of the city; and his charity specially displayed itself when a contagious disease struck down at the same time as many as sixty members of the


Community. For months he allowed himself neither sleep nor food, his life being miraculously supported by Almighty God, for the sake of the sick whom he so charitably tended. 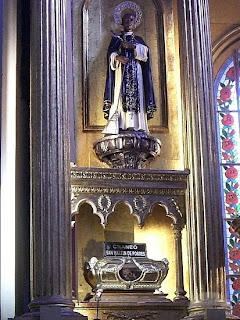 It was his duty to distribute daily to the poor the remains of the meals of the Community. When his stock of food was insufficient for the numbers who presented themselves, he would obtain its miraculous multiplication by his faithful and humble prayers, so that he had enough left for the poor who were ashamed to beg, to whom he sent relief by trusty messengers. His charity extended to every sort of human misery. Through the instrumentality of this humble religious, an immense orphanage was established in Lima, containing several hundred children of both sexes; and to this were soon added other buildings to shelter foundlings, the sick poor, the aged, and penitents. In order that needy wayfarers might not be tempted to steal, he caused fruit-trees to be planted along the public roads to provide them with refreshment.


Even the dumb animals had their share in his compassionate tenderness, and seemed instinctively to know that he had constituted himself their physician and protector. When hurt or half-starved, they betook themselves to the Convent, where Blessed Martin always fed and nursed them; till at length his hospital for dogs, cats, and other suffering animals became so full, that he persuaded his sister to give them accommodation in her house, whither he went daily to feed them and dress their wounds. God gave His servant a wonderful power over these dumb creatures, so that they understood and obeyed him. He could not bear to see rats and mice destroyed, and would say: "If these poor little things were daily provided with food as we are, they would do no mischief." Then he commanded the creatures to withdraw to a remote part of the garden, whither he carried a supply of food for them every day ; and their ravages in the Convent ceased. Even to the present time Blessed Martin continues to exercise his miraculous gifts with regard to the lower creation; he is constantly and efficaciously invoked to put a stop to the depredations of rats, mice, and other animals. 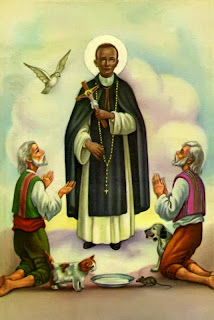 His burning love for his crucified Master, together with his zeal for souls and deep contrition of heart, found expression in the severest austerities. Thrice every night he afflicted his body with a terrible discipline, the third time receiving this penance at the hands of some of the Indian slaves attached to the service of the Convent; and to prolong the pain he would afterwards bathe the torn and wounded flesh with vinegar and salt, offering all these sufferings, after the example of his holy Patriarch, Saint Dominic, for his own sins, for the conversion of sinners, and for the relief of the souls in Purgatory. He fasted almost the whole year round on bread and water, spent the greater part of the night in prayer, and took his scanty rest in the Chapter-Room, on the bier used for the burial of the dead. So rigid was his poverty that he possessed nothing but a rosary and a crucifix; he had not even a change of clothes. His obedience was simply miraculous. He seemed to divine what was required of him; and over and over again Superiors, coming to give him some order, found him already in the act of executing it.


Blessed Martin was united in close and holy friendship with a beatified lay brother of the Order, Blessed John Massias, then resident in the Convent of Saint Mary Magdalen in Lima. Blessed Martin's happy death took place on the 5th of November, A.D. 1639.  His miracles, both during life and after death, were very numerous ; he possessed in an eminent degree the gift of prophecy; he is known to have been frequently present at the same time in two places far remote from each other. Blessed Martin was beatified by Gregory XVI.


O God, you let the blessed Martin, your confessor, to heavenly glory along the way of humility;  grant, we beseech you, that being made humble by his example, we may deserve to be exalted with him in heaven.  Through our Lord…
Posted by Breviarium SOP at 12:00 AM
Email ThisBlogThis!Share to TwitterShare to FacebookShare to Pinterest
Labels: 1962 Dominican Rite Calendar, Dominican Feast Days, Dominican Liturgical Year, Dominican Saints & Blesseds, Liturgical Year
Newer Post Older Post Home