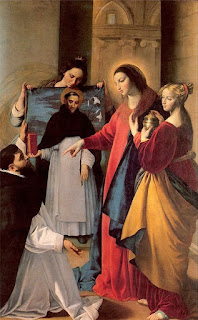 Prior to the revision of the liturgical calendar of the Order initiated in 1960, the feast of the Commemoration of Our Holy Father St. Dominic in Suriano would be celebrated today, if it were not a Sunday.  The feast was always a totum duplex feast, equivalent to a Ist Class feast in the 1962 breviary classification system.    I know I complain often about how so many feasts were removed from the Dominican calendar, but this one really baffles me, as it is such a wonderful way to pay tribute to the patronage of St. Dominic, our Lady, and the two (2) "unofficial" patronesses of the Order, St. Mary Magdalene and St. Catherine of Alexandria.
The feast was traditionally celebrated on September 15, and the Feast of the Seven Dolors or Our Lady was celebrated on the 3rd Sunday of the month of September.  However, I believe, when the feast of the Seven Dolors was fixed on September 15, this feast was transferred to September 25 until it was deleted from the calendar.
The feast would have been announced yesterday at Pretiosa:

The commemoration of our Father St. Dominic at Suriano. A totum duplex feast.

In the 1909 Breviarium S.O.P., the propers for the feast was essentially that of the feast of St. Dominic, with the exception of Lessons iv, v, and vi, which were proper and were taken from the accounts of St. Dominic's life by "Theodoric of Apoldia, St. Antonius and other biographers".
The legend is beautifully described in "Short Lives of the Dominican Saints” (London, Kegan Paul, Trench, and Trübner & Co., Ltd., 1901):
The event commemorated in this festival is the appearance in the Dominican Convent of Soriano, in the extreme south of Italy, of a miraculous picture of Saint Dominic, which is still preserved, and is held in the utmost veneration even in our own day. A certain Father Vincent of Catanzara in Calabria, in the year 1510, was thrice commanded by Saint Dominic in vision to found a Convent of the Order at Soriano, a work which he accomplished in spite of considerable obstacles which were not overcome without miraculous intervention. It had been decided that the Convent should be built on the plain, but the cross which had been planted to mark the destined site was found to have been mysteriously removed in the night to the hill on which the building was eventually erected, and where it still stands. 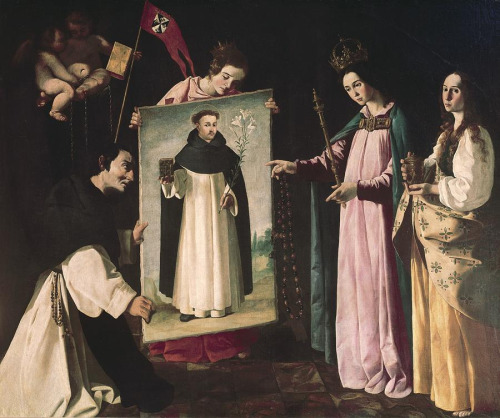 Several years later, on September 15, A.D. 1530, just as the religious were assembling to chant Matins at midnight, the Sacristan suddenly beheld three ladies Sep. 15 of majestic aspect enter the church, which he knew he had left locked before retiring to rest. One of them addressed him, asking to whom the church was dedicated and whether it contained a picture of its patron. The Friar replied that the church was dedicated to Saint Dominic, but that, owing to the great poverty of the Community, only a badly painted fresco of the Saint was to be found upon its walls. Then the unknown lady put into his hands a roll of canvas, which till then she had carried in her hand, and bade him take it to his Superior, who bore the title of Vicar, the little Convent not having yet been erected into a Priory. The Vicar, astonished at the sight of the picture, which proved to be a portrait of Saint Dominic, hastened to the church to thank the giver, but all three mysterious visitors had disappeared, though the outer doors still remained locked. The following night Saint Catharine of Alexandria appeared to one of the Fathers, who had a great devotion to her, and told him, in answer to his prayers, that the donor of the picture was no other than the Blessed Virgin, and that the two who had accompanied her were the patronesses of the Order, Saint Mary Magdalen and herself. 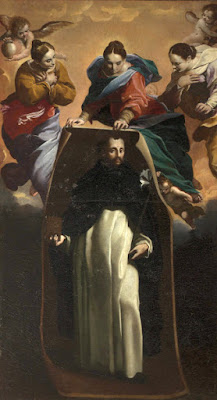 In obedience to the express command given by Our Lady to the Sacristan when bestowing the picture, it was placed over the High Altar; but, as the wall against which it hung was extremely damp, the Fathers afterwards decided on removing it to another altar, near the door of the church. The following morning, however, the picture was again found hanging over the High Altar. The Vicar, believing that it had been removed thither by the Sacristan from a desire to execute to the letter the orders given him by the Mother of God, severely reproved him, and had the picture carried back to the altar agreed upon. The next day, it once more appeared over the High Altar. Again the Sacristan was charged with obstinacy and disobedience. In vain he protested that he had never touched the picture. The Vicar ordered it to be replaced near the door, and on the following night locked the church himself and kept the keys in his own possession. Nevertheless on the third morning it was again discovered over the High Altar. Convinced at length that its removal was the work of no human hand, the Vicar allowed it to remain in the spot which Our Lady had chosen for it, and where it has ever since remained, miraculously preserved from being injured by the damp.
When the picture was exposed to public veneration, a multitude of prodigies took place, the account of which fills volumes. No less than sixteen hundred of these miracles, juridically attested, took place within the space of seventy-eight years.

Pope Innocent XII., in the year 1644, granted a festival in commemoration of this event and of the vast number of miracles vouchsafed before the holy picture. On September 15, A.D. 1870, just five days before the sacrilegious occupation of Rome by the troops of Victor Emmanuel, a new prodigy took place at Soriano.

A wooden statue of our holy Father, Saint Dominic, of life-size, had been exposed in the sanctuary on occasion of the festival, and was to be carried in procession in the evening. This statue was suddenly seen to move like a preacher in the pulpit ; it advanced and drew back ; the right arm rose and fell ; the countenance became animated, sometimes assuming a severe and threatening aspect, at other times appearing sad, or again full of sweetness and reverence as it turned towards the picture of our Lady of the Rosary. This extraordinary spectacle lasted for an hour and a half, and was witnessed by about two thousand persons. Some of the bystanders, to satisfy themselves that there was Sep. 15 no trickery in the matter, removed all the surroundings of the statue and completely stripped the table on which it was standing. These measures only served to place the miraculous nature of the occurrence beyond the possibility of a doubt. A juridical inquiry was held by order of the Bishop of Mileto, in whose diocese Soriano is situated, and the extraordinary event was announced to the Order in a circular letter by the Most Reverend Father Alexander Vincent Jandel, who was then General. In a private letter written by his Paternity shortly afterwards he says: "I think our holy Father, Saint Dominic, meant to warn us of the impending scourges, and to summon us to do penance; but this warning is in itself an act of mercy on the part of Him who strikes only to heal."

Prayer
O God, you were pleased to enlighten your church with the merits and teaching of the blessed Dominic, your confessor and our father; grant, at his intercession, that she may not be wanting in temporal help, and may always increase in spiritual growth.  Through Our Lord...
Posted by Breviarium SOP at 12:00 AM
Email ThisBlogThis!Share to TwitterShare to FacebookShare to Pinterest
Labels: 1909 Breviarium S.O.P., Dominican Feast Days, Dominican Liturgical Year, Dominican Saints & Blesseds, Lost Feasts
Newer Post Older Post Home