October 7: The Blessed Virgin Mary of the Rosary, I Class

Today, in the 1962 Dominican Rite Calendar, we celebrate the feast of the Blessed Virgin Mary of the Rosary.  The feast is I Class in the calendar of the Dominican Order, so the festive office is prayed according to the rubrics.  Traditionally, Dominican Tertiaries would fast on the vigil of this great feast.  The hymns at 1st Vespers, Matins, and Lauds celebrate the three traditional groupings of mysteries...the Joyful, Sorrowful, and Glorious.  You can download the entire English translation of the office here.

The great feast was announced at Pretiosa yesterday:

The Commemoration of Our Lady of Victory, which Pope Plus V instituted to be made annually, on account of the famous victory gained on this very day by the Christians in a naval battle against the Turks, by the assistance of the same Mother of God. However, Gregory XIII decreed that for the same victory there should be celebrated on the first Sunday of this month the annual solemnity of the Rosary of the Most Blessed Virgin. 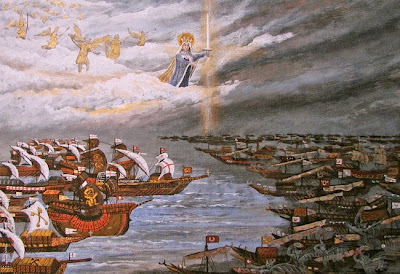 From the Dominican Breviary (antiphon to the Psalms at First Vespers):

This is the Queen of virgins, the virgin, beautiful as a rose, who bore the king.  Mother of God, through whom we gain God and man, gracious Virgin, intercede for us all. 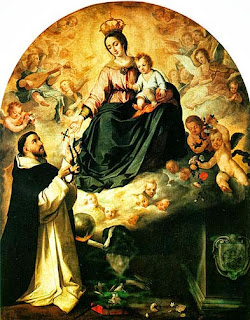 The devotion of the Holy Rosary is the great treasure bequeathed by our holy Father, Saint Dominic, to his Order and to the Church.  A certain obscurity hangs over its origin, but a widespread tradition asserts that it was revealed to teh Holy Patriarch by our Blessed Lady herself during this labors in Languedoc for the conversion of the Albigensian heretics, and that by preaching his devotion he gathered an immense harvest of souls.  Pope Clement VIII declares that Saint Dominic first established the Confraternity of the Holy Rosary in the Church of Saint Sixtus in Rome, and he is know to have established it also at Palencia in Spain.  There can be no doubt that the use of the Hail Mary as a popular devotion dates from the beginning of the thirteenth century; though it is impossible to determine whether the preaching of the Rosary spread the more universal use of the Angelic Salutation, or whether it was the increasing love and popularity of that prayer which moved the holy Patriarch to adopt it.
During the fifteenth century, however, which was a period of general religious declension, the "Roses of Mary," as they had been popularly called, fell into partial oblivion and neglect, until, towards the close of the century, they were revived by the preaching of the celebrated Dominican, Blessed Alan de la Roche, a Briton by birth.  It is interesting to be able to record that in England at least the Rosary never fell into disuse, but enjoyed undiminished popularity all through the thirteenth, fourteenth, and fifteenth centuries; and that Henry VI prescribed that the scholars of Eton College, founded by him in the year 1440, should daily recite "the complete Psalter of the Blessed Virgin, consisting of a Credo, fifteen Paters, one hundred and fifty Ave Marias".  It is of course beyond question that the children of Saint Patrick, ever devout to our Blessed Lad, were ever faithful to the devotion of the Rosary; and that in the evil days, as they would rather have given their lives than deny God and His Holy Mother, so they would rather have shed their blood than part with their beads. 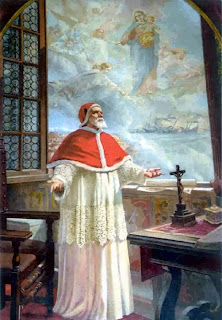 The solemnity which we celebrate on the first Sunday of October [now October 7], was established in thanksgiving for the great naval victory gained by teh Christians over the Turks at Lepanto on Sunday, October 7, A.D. 1571.  On that memorable day, all the Confraternities of the Rosary in Rome had assembled in the Dominican Church of the Minerva to offer their devotions for a blessing on the Christian arms through the intercession of Mary.  The Pope, Saint Pius V, himself a Friar Preacher, had attended the procession; and, on his return to the Vatican, God was pleased to reveal to him that the Queen of the Holy Rosary had even in that hour obtained a glorious victory for the Christian fleet.  In testimony of his gratitude, the Holy Pontiff decreed that the 7th of October should henceforth be kept as the Feast of our Lady of Victories.  But Gregory XIII, admiring the modesty of his
predecessor, who had not chosen to make mention of the Rosary, for fear he should be deemed to have sought to promote the honor of his Order rather than the spread of the truth, ordained that in the future the Feast of our Lady of Victories should be kept on the first Sunday in October in all Dominican churches and wherever the Confraternity of the Rosary existed, under the new title of the Festival of the Most Holy Rosary, which until that time had been on March 25, the Festival of the Annunciation.  This was finally extended to the universal Church by Clement XII, who changed the wording of the Roman Martyrology to its present form:  "The commemoration of Holy Mary of Victory, which Pope Pius V ordained to be observed ever year, in memory of a famous victory gained at sea this day by the Christians over the Turks, through the help of the Mother of God; and Gregory XIII for the same reason likewise ordained that the annual solemnity of the Rosary of the same most Blessed Virgin should be kept on the first Sunday of this month." 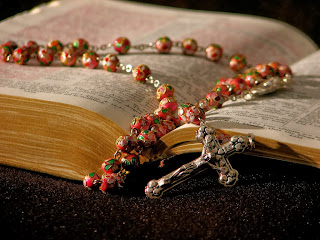 In our own day, the devotion of the Holy Rosary has received a fresh impulse from the Encyclical Letters published year after year by our Holy Father, Leo XIII, whom we may call "the Pope of the Rosary," and who has constantly urged on the faithful the use of this salutary devotion, both as an excellent means of personal sanctification, an efficacious form of intercessory prayer, and a powerful weapon against the enemies of the Church.  His Holiness has likewise extended to the universal Church the practice, hitherto confined to the Dominican Order, of consecrating the whole month of October in a special manner to our Lady of the Rosary.
Prayer
O God, whose only begotten Son by his life, death, and resurrection has purchased for us the rewards of eternal salvation, grant, we beseech you, that meditating upon these mysteries of the most holy Rosary of the blessed Virgin Mary, we may imitate what they contain and obtain what they promise.  Through the same...
Posted by Breviarium SOP at 12:00 AM
Email ThisBlogThis!Share to TwitterShare to FacebookShare to Pinterest
Labels: 1962 Dominican Rite Calendar, Dominican Feast Days, Dominican Liturgical Year, Dominican Saints & Blesseds, Liturgical Year
Newer Post Older Post Home